Set The Stage For Freelancing With A Powerful Personal Brand

In a competitive business environment there are two types of branding which are critical for Freelancers to master.

The first is branding that focuses on your products/services. The bottom-line goal of this overarching branding strategy serves as your north star in terms of all things customer-focused from messaging to customer service to tonality, content, product development and beyond. It helps set direction and provides a focus on how to prioritize tasks.

Another way to describe a top-tier brand strategy is a promise you make to the world. Yes, the world! Sounds a little grand but once you step out into the freelance world you are opening your doors wide, perhaps wider than you imagined!

Keep in mind, a personal brand is a supporting tactic in your overall marketing plan and should be developed to integrate into your master strategy as well as standing alone.

The excitement of creating a personal brand is the opportunity to define it through your voice and interests.

Why should a freelancer invest precious time and resources in building personal branding? In a noisy and aggressive business world, all things being equal, people like to do business with people they know and trust. A personal brand pulls down the Wizard of Oz curtain that frequently leads to misconceptions and miscommunication.

The Benefits Of Personal Branding

The Path From Fortune 500 To Freelancer

So there I was, sitting next to my five colleagues. Our department was shutting down and leadership was offering a severance package. The decision I pondered for some time was finally forced front and center. Would I stay in corporate America, or would I take this opportunity and make the leap into freelancing? Let me rewind just a bit and tell you how I ended up here.

From 1997 to 2001 I worked for seven companies and temp agencies and as I traveled  across the United States acting, directing, and studying improv theatre.  It was a grand adventure.

When I moved back home to Atlanta in 2001, I was offered a  permanent administrative assistant position at a Fortune five hundred company. This was my opportunity for a steady day job while I created and ran my theatre company in the evenings. The stability obviously worked for me because thirteen years later I was still working the same day job. By this point, I had moved up in the company from an assistant to working in communications and innovation in the downtown offices. Then it hit me, would I ever be able to break this routine and forge my own path?

In  the fall of 2014, on a seemingly normal day, I arrived at the office and was ushered into a conference room with the rest of my Readiness and Engagement team. In front of each of us was placed a packet of paper by a representative of HR. It was clear what was happening. There was a reduction in force occurring and we were that reduction. I saw in the faces of my colleagues varying forms of anger, sadness, and frustration. It was difficult to maintain the proper somber attitude in support of my coworkers  because as we turned to the details of our severance packages, I saw something wonderful. I had been given enough money to make the break from my nine to five job and pursue my dream of going out on my own.

Are you someone who wants to make the same transition? Are you facing  your own severance package opportunity? Have you saved money in your attempt to make a leap but something is holding you back? You might very well be asking yourself “can I really do this?”

The answer I found was “Yes you can, but you will need a plan.”  You will need a guide to help maneuver around pitfalls so things don’t dry up before you strike oil.

At the time I was attending Watermarke Church pastored by Andy Stanley. As a way to practice and showcase my craft, I doodled an infographic of his sermon. It turns out it got noticed by Jason Montoya who then favorited the tweet. Wondering who this person was, I clicked through to the profile page of the young man that would soon change my way of thinking about this perfectly timed opportunity.

I messaged him immediately and we soon grabbed hot drinks which lead to an extended lunch. We could see right away we were like minded and a friendship was quickly forming.“As a futurist, I anticipate how things could unfold for the good and the bad. When Jim told me he’d be leaving his corporate career and launching into freelancing, I immediately saw all of the potential positive and negative outcomes he would face on his journey. I was immediately compelled to share insights that would allow him to replace the structure he lost from his company and prevent the many hardships he would likely endure.” – Jason

As Jason listened to my story, he shared practical and valuable advice. Jason encouraged me to focus on understanding how committed I was to freelancing In a kind and non-insulting way, he challenged my commitment. I had signed my severance agreement and was out the door of my old job, so I wondered how much more committed I am? As it turns out, the action of starting did not necessarily equate to a commitment to finishing. Jason helped me see how difficult the life was if I was not fully committed with eyes wide open. (Jason added this same information as Achievement #1 of his book.) “Commitment is vital. It’s why the first achievement revolves around this idea and why that chapter is twenty percent of the Path Of The Freelancer book. When we see something we want to do, many times we only see the tip of the iceberg, so it’s important we are deliberate in evaluating freelancing. This way,  when we move forward we’re not caught off guard by the troubles we’ll likely face. ” -Jason

Clear and focused, my time with Jason was appreciated and memorable.  Our recurring meals at Willy’s Mexican Cantina led to numerous helpful discussions on what I was offering in my package (Achievement #2) revenue streams (Achievement #3), marketing, networking, maximizing my existing clients (Achievement #4) and my most sales friendly skills. My Journey was beginning and I wasn’t doing it alone.“As a freelancer, we’re technically on our own and making choices that help and hurt us. This is why it’s vital we build deep relationships to form a community that helps us endure and progress. Jim became a great friend and support during my freelancing journey and someone who helped encouraged and share ideas. The burden was lightened by his companionship. ” -JasonAfter six months of the more difficult aspects of my new reality kicked in, I remember telling Jason that I didn’t know if freelancing was for me. I was barely making it month to month and certain parts of my year were slow. It felt like I was stranded and wandering in the desert. He walked me through what he called the water tower  management system. He prepared during peak seasons for times in the year when things slowed down by saving money. Quickly taking his advice, I began to look at the overall year’s income differently. The pattern I had developed of getting a paycheck on the same day of the month every month for years had negatively impacted my view of income. I had become overly dependent on my corporate job structure. Now I’d need to leverage the windfall of client surplus work to help me sustain out over the bare patches. (Achievements #5 and #6)“Finishing is never easy. Imagine running a marathon. At the end of a marathon, a crowd is waiting to cheer us on, hand us water and pick us up when we fall. When we buckle down, take responsibility and lead courageously through the difficult and unknown, we elevate to the highest level of freelance flourishing.” -JasonThis insight was incredibly valuable to me and I had no qualms letting Jason know. In fact, I encouraged him to write a book on the subject and launch a podcast. Reluctantly, Jason finally  agreed and began work on writing Path of the Freelancer as well as launching a monthly meeting to share these insights with other freelancers. I am happy to say, by the time you read this, Path Of The Freelancer will be ready to give you the same structured approach that it gave me in the most critical time and place in my life.

(Since then Jason has shared with me Achievements #7 and #8 which make an incredibly well-rounded course in freelance success.)

When I started this journey, my income was entirely sourced from a fortune five hundred company. Today my income is one hundred percent from coaching, speaking, writing and training others to improve their communication, collaboration, and leadership. A huge thank you goes out to Jason Montoya and his insights in Path Of The Freelancer. Without this guidance, I most certainly would not have made it this far.Through Path Of The Freelancer, you have the opportunity to receive this insight and support. Please check out the resource section to help you in your freelancing journey. -Jason

Are You A Freelancer?

What I found most interesting about this survey were the results of the 26% who are not a freelancer but would like to be one. It seems there are many people like Jim Karwisch ready to make the leap.

There are almost as many people who want to freelance as there are who actually freelance part or full-time. If all of these people were to join actual freelancers, 54% of the workforce would be freelancers. Let that sink in for a moment.

Now, this is only 100 people so the sample size is fairly small, but this small slice of data provides some interesting data to think about.

I sent a follow-up survey to the 54% who were freelancers or wanted to become one. Here is how 48 responded. 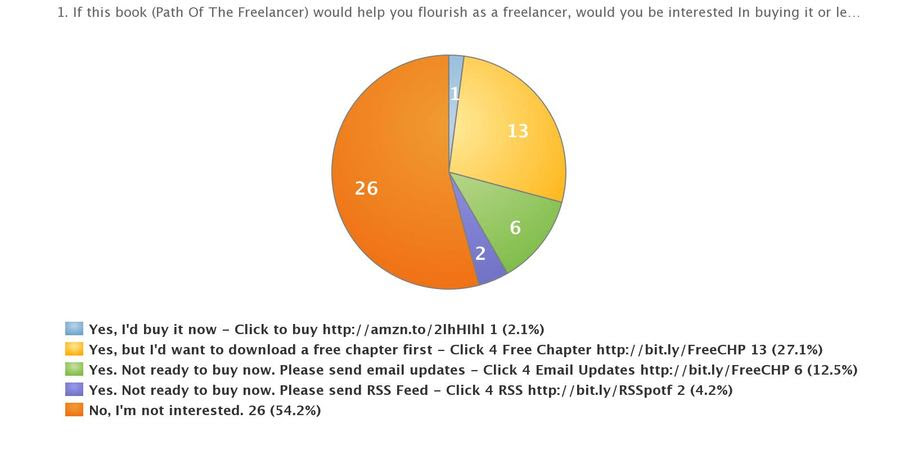 The 48 respondents** answered as follows:

The follow-up survey did include a photo of the book cover before displaying the answers.

In my review, I was definitely happy to see one person was ready to buy right now. Almost half of the 48 who answered were interested in the book, with 13 people interested in buying after reading a free chapter.

While 1Q is a great tool for surveying and driving action, I’d have to drive 13 or 14 sales from the two surveys ($1/respondent for a total of $148) to fund the cost of the tool. If I could discover the specific demographic to target and could get my acquisition cost down to $5 per sale, this could become an effective tool for driving book sales.

You can review the demographic data for both surveys below.

*The following is a breakdown of the demographics of the 100 respondents.

**The following is a breakdown of the demographics from the 48 who are freelancing or want to become one and responded to the follow-up survey.

No comments to show.